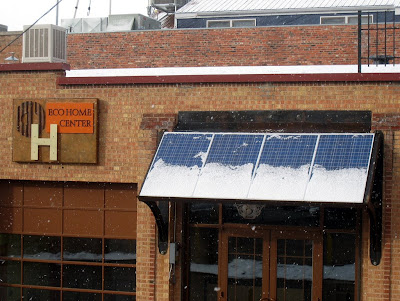 I’ll be writing a post about the benefits (and challenges) of Feed In Tariffs (FITs) in the near future. Until then, Vermonters interested in Solar can read this solar industry article and updates from revermont.org site.

Over the course of the 25 year life of the panels, that 25 cents/kilowatt will add up to thousands of dollars for solar power owners. Obviously, this legislation will inspire many to go solar. A similar program in Spain and Germany has created the largest market for solar in Europe…and a lot of jobs. Vermont is likely to see the same growth.

And don’t worry about snow and cold! Solar works even better when it’s cold than when panels are baking in the sun. The snow should mostly fall off a typically angled roof. See above photo.