Photo: Thanks U.S. Dept of Energy

I’m confused. Someone told me solar is expensive because you don’t just have to buy the panels, but also get an inverter, and then you have to replace it. What’s an inverter, and should I really care?

To be slightly more technical, an inverter changes direct current “DC” energy that solar panels produce into alternating current or “AC” energy that your t.v. and computer uses. In fact, unless you’re out in the middle of nowhere and off the grid, anything you plug is going to require AC energy. So the inverter is necessary for solar. 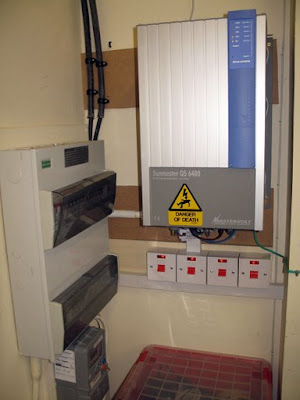 As to cost, inverters don’t last as long as solar panels. Panels last 25-30 years, some even longer. Inverters generally conk out in 12-15 years. A solar installer should tell you about this. These days, inverters cost around $1200-2000, which is included in your initial solar system price.

However, in 15 years when your inverter goes bust, that price may be significantly lower…or the same. It’s unlikely to be more. So, worst case, be prepared to replace the inverter 10-15 years from now. A good solar company will be showing you this info in the sales proposal and/or presentation. If they don’t ever mention it …. that’s not a good policy, in my opinion.  Add that aspect to your selection process.

The good news is that by the time your inverter needs replacing, your system has usually paid for itself. Even better, for the next 10 to 15 years of your solar panel life, the further energy savings should more than offset this expense….by a lot.

An installer might also suggest a new kind of inverter, called “micro inverters.” Instead wiring all the panels together and hooking it up to the big box on the wall, the DC to AC conversion takes in a little box installed with each solar panel. These new inverters are also supposed to last the same amount of time as traditional inverters.

Bottom line, inverters are needed, they die after 10 years, but your solar savings eventually pay for their replacement.

How can I tell if my solar panels are working properly?

What should I ask him?

we just had 31 solar panels installed, and we have to upgrade the electric panel. How do we do that?

How are Solar Panels Attached to Your Roof?

The 5 best ways to finance solar panels for your home, from solar loans to PPAs