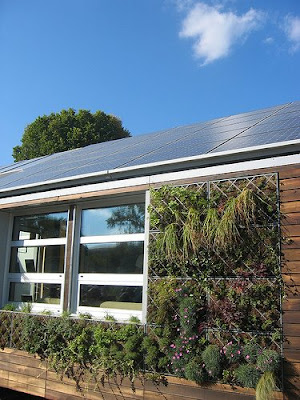 This is the fourth and final answer to Cash Poor Solar Richard, who wrote that he wanted solar panels, but had no upfront cash to pay for them. To recap:

If there’s one thing better than 0-down financing, it’s 0-down financing that doesn’t lock you into staying in your house for 15 years or carrying your solar panels to the new house, and doesn’t care about your home equity or debt to income ratio. Who could be this easy with credit?

Why, your City…if you live in Berkley, California or Palm Springs, California, Boulder Colorado, and a few other places listed here.

CityFirst is an initiative that finances solar for homes and businesses through city or county bonds. Any city in California (or any state) can adopt this model, but so far only two have. San Diego and Los Angeles are reportedly offering the program in the near future, perhaps the summer or fall of 2009.

If your city isn’t doing this program, call your mayor, councilman, the newspaper, local bloggers, and ask why the &#% not. It’s a no-brainer.

As an example of the deal in Berkley, if you financed 15 grand (about a 4kw system) worth of installed solar panels after State rebates, your equivalent monthly tax payments would be about $120/month. Not bad. Solar Fred likes it. You should like it.

If not, go with option 3, home equity financing. If you can’t do that, go with leases, option 1. I’m less of a fan with PPAs these days because of the typical upfront costs that are usually more than $1000 advertised. But PPAs are VERY variable, so as solar heats up, you may find different models.

If there’s a municipal program in  your area, you can find a qualified installer here and get a free quote.  It’s free, so nothing to lose but a bit of time. Check out the form here.

I have been placed on disibilty, so my income is limited. I am moving to my hunting property I am in need of a fro finance on a solar system for my cabin, I will heat with wood, want to run fridge, tankless hot water,

we are a small family owned solar installation company. I’m desperately trying to get some finance program for our customers. I know there is 12 years 2.9% APR loans for solar out there but I can’t find them (as a matter of fact I did but they didn’t have it any more, to much demand and they run out of them). Please help me to find out more about this loans. It makes all the difference in the world as the customers start saving money in the first year!

Hey Solar Fred,The articles that you have written regarding financing and solar in general have been very helpful to me. I'm a UCLA student currently interning at a non-profit and working on a research project for the CEC regarding the different financing options – would you be willing to help point me the right direction and/or provide some additional guidance? Any help would be much appreciated. Please contact me here: qnguyen AT solartech DOT orgBest,Quan

Don’t DIY: Why installing solar panels yourself can cost you more

How good are solar panels if they don't face south?